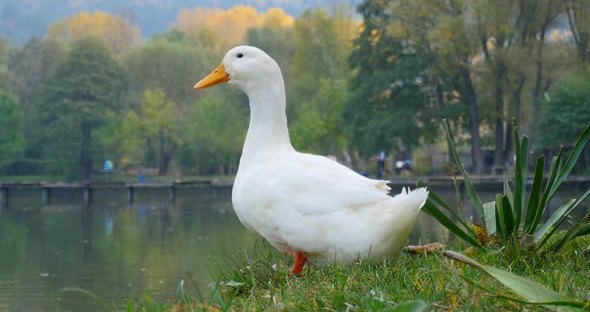 Here’s another story I had to write for English 4; a children’s story! I rather enjoyed doing a simpler plot but just characters just as lovable as the next. I hope y’all enjoy and don’t forget to let me know what you think. Faith out!

There have been many a tale told to the human world about the everyday life and adventures of animals. It’s no uncommon occurrence that human are just as curious about animals as they can be of us. However, this tale is a simple one of a simple duck who lived in a simple home.

The duck’s name was George. George had pristine white feathers and yellow bill from which would emit his boisterous and cheery voice. He lived with his five siblings, three sisters and two brothers, with their five cat and six dog friends. They all lived with the Hill family in a peaceful community in the suburbs as he heard them describe. Their house was modest with a fairly small backyard which was home to the pond the ducks frequented; well, except George. George had a problem, he was an indoor duck.

It wasn’t he fault, truly it wasn’t. For heaven’s sake, their ‘mother’ Liza (who was a human), often times wished their was a way to help George return to their pond outside. The issue was George was a lame duck who couldn’t walk anymore. When he was born, he struggled to waddle after his siblings so the Hill’s brought him inside their house which smelled liked dog hair and chai tea to live in the Mr and Mrs Hill’s room.

George grew to enjoy these times; he got to wear these straps they called ’suspenders’ to properly hold up a ‘diaper’, took baths in the huge bathtub which George swore was made of marble like the sinks, and he got attentive care from all five Hill children.

Despite this, George wanted to return to the pond outside where the fresh air would ruffle his feathers and he could hear the wild ducks that lived in the lake that resided behind the house. His colorful mind would wander along adventures with his siblings: Snuggles, Pokey, Mirage, Jinxy, and Sputnik.

George was sitting on the windowsill one day, gazing out into empty space as the youngest Hill daughter, Grace, came into the room to keep him company. She had noticed the duck’s sad expression many a time before. His tail would droop and his bright eyes dulled as they stared aimlessly anywhere with vibrant color and steaming with life, a sight not truly found within the concrete walls of the Hill’s residence. George stirred in his spot, desperately trying to move his feet again but failing. Salty water was threatening to become tears as he tried to forced his numb body to respond to his will. Her tender heart, which so adored the pets she took care of, ached while her clever mind began to formulate a plan to get George outside.

Leaving George alone once more, Grace raced downstairs and burst into the sewing room which tripled as a guest room and office for her older brothers (who aspired in filmmaking). Liza and her brothers, Craig and Edgar, looked to see Grace with beaming energy. “I have an idea to help George get together with his siblings outside!”

George was so lost in his wishful musings he hadn’t noticed the change in the air around him. Sure, he could hear the scary dogs downstairs who were probably arguing about nothing again. Two dogs in a particular, NewDog and Buddy, were vicious when it came to arguing and they disliked nay new human who entered the house. They scared George and most of the other ducks, George was happy to remain safe upstairs where they didn’t bother him. The cats were nicer in the sense they didn’t hurt him unless got too close. All in all, most the pets got along especially with the only nice dog, Murphy.

“George?” He turned his head away from the bright window to glance at the opening door. Grace was holding a little chair with wheels and a tube with little palm trees all over it with a huge grin. George was confused. What was so special about them?

“It’s a float and wheelchair, George,” Grace said simply to answer George’s unspoken bafflement. It was then it clicked in his mind. George flapped his wings in excitement before stopping to let Edgar and Craig help into the chair. He would have to use his bill to move, but he didn’t mind. The kids helped him down the stair before letting him move himself to the backdoor. George could hear it now, the sound of the birds and wind rushing past the trees, his siblings chatting about what they could hear the wild ducks say beyond the fence, all the smells of the outdoors waiting for him. Liza opened the door with a soft smile to George. “Welcome outside, George.”

Sherwood Forest, in the TARDIS, Narnia, Middle Earth, at Fairy Tail, on the Moon, Avengers Tower, flying in Neverland, fighting with the Guardians of the Galaxy, solving mysteries with Nancy Drew, running from cyborgs with Isa, writing in a steampunk, topsy-turvy world with senbonzakura, inside myself with the Lord
281-903-4081. Email: fvpawley@gmail.com
What? I'm in my world so leave me be. Unless you're a friend.

If you are curious about my writings, I would be more then happy to personally tell you so contact me!